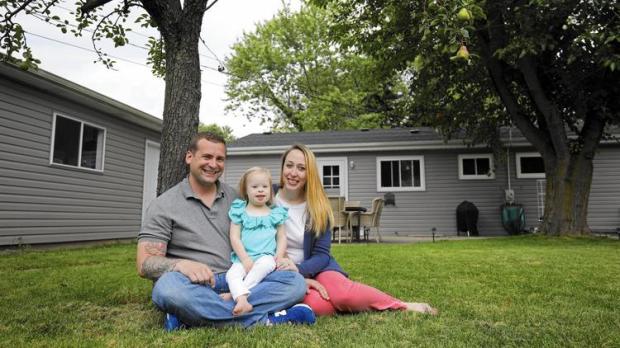 When Marisa Dunn was trying to decide where to live, she considered three things: good health care, proximity to family and fantastic schools.

“We could travel for health care, we could travel to family, but we wanted to be in a school district that would provide the services our daughter would need, and would be good for future services,” said Dunn, 32, a labor and delivery nurse.

A year and a half ago, Dunn, her husband, Ed, and their daughter, Eleanor, who is nearly 3 and has Down syndrome, moved from Florida to Illinois. The trio resided with Dunn’s parents in Riverwoods for nearly a year while she delved into research on specific school districts before deciding where to settle.

After an extensive search, she chose Deerfield.

Then, the Dunns made some sacrifices to live in this relatively expensive suburb.

Instead of a four- or five-bedroom home, the family bought a three-bedroom ranch with a tiny kitchen, even though Dunn said she swore to herself that she’d never have a small kitchen again. She and her husband, a mechanical engineer, traded in their cars, too, in pursuit of more affordable auto payments.

“My husband gave up his beloved BMW sports car — that was his baby — for a Subaru,” Dunn said.

The Dunns aren’t unique. They join scores of other homebuyers placing an emphasis on school districts.

But when several homebuyers want to purchase properties in the same school district, houses in those coveted areas become difficult to score. Competition can be stiff; even homebuyers without children recognize the value….